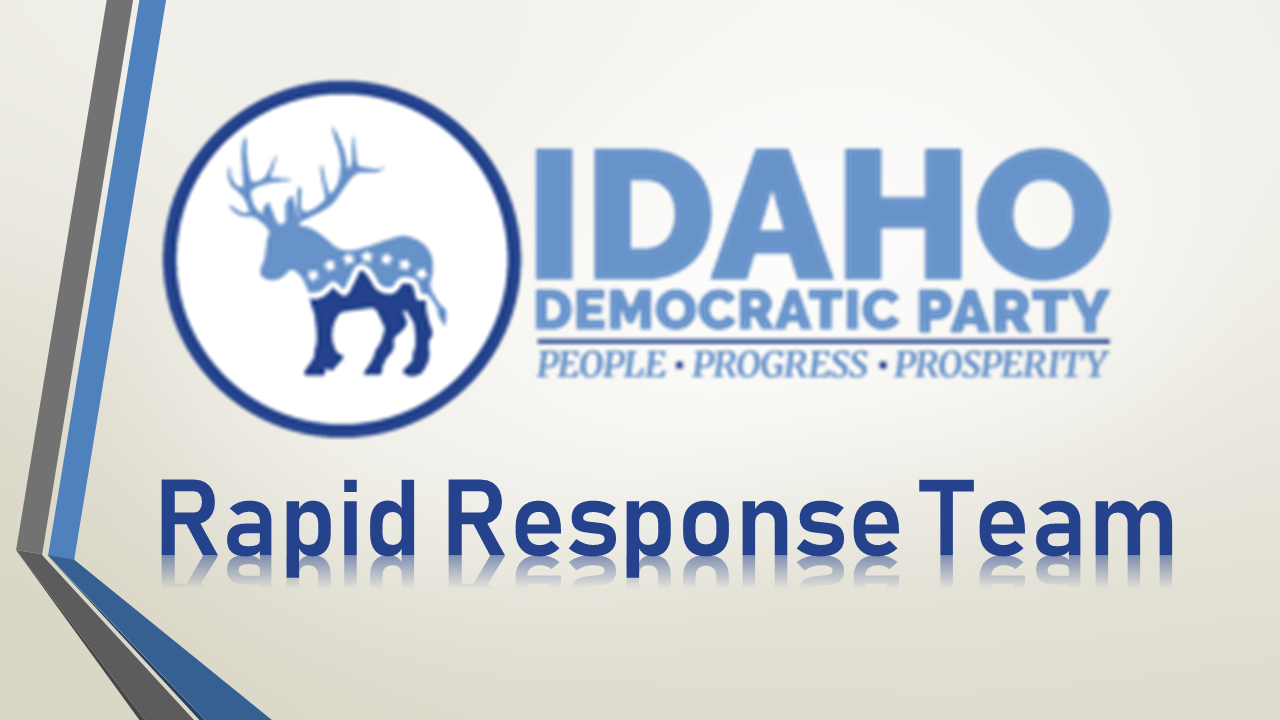 Real change doesn’t happen overnight. Rather, it’s cultivated through years of careful planning and thorough execution. To achieve this needed change, the Idaho Democrats have created a Rapid Response Team.

Formed in the aftermath of the 2016 elections, the Rapid Response Team is a group of dedicated and diligent volunteers who meet once a week to call voters around the state. “We make phone calls for whatever’s going on in the state legislature at the time,” says Aryan Parthor, Director of Operations of the Idaho Democratic Party.  The team responded to publicly funding Pre-K education and Medicaid Expansion. They will soon start calling Idaho legislators about the financial disclosure bill.

Parthor also emphasized how easy it is to make the calls. “They’re super easy”, he said. “We never call Republicans. Our target is our base of Democrats and swing voters. If you’re at all nervous about phone-banking, these calls are a great way to start because of how smooth and friendly they are.”

The calls target individuals throughout the state. In January alone, calls were made to people in West Boise, Coeur d’Alene, Moscow and Pocatello. “Obviously, Idaho extends past the Treasure Valley,” said Idaho Democratic Party Communications Director Shelby Scott. “Only about a fifth of our calls are made to the Boise area.”

Individuals who commit to the work quickly coelesce as a committed team. For example, Boise’s Rapid Response group has become a community within a community. Hundreds of activists have become involved over the past year. However, their reasons for joining are various. For Joe, a college student, it is about the issues. “Year after year, Idaho comes in dead last in education. And, year after year, Republicans give us the same excuse as to why they can’t properly fund our public schools,” said Joe. “I’m sick of the excuses. They will not do what’s right for our state. I volunteer because I’m done waiting for them to do what’s right. I’m taking matters into my own hands.”

Peggy is another weekly volunteer. She likes listening to people from different parts of Idaho. “When you’re in Boise, you don’t really hear about what’s going on in the rest of the state unless it’s a celebration or a festival,” said Peggy. “This way, I can!”

So, what’s next for the Rapid Response Team? “We’re looking to expand our weekly phone banks to different parts of the state,” explained Idaho Democratic Party Executive Director Elle Casner.  “So far, our only phone bank is held in our office in Boise. Yet, we have hundreds of Rapid Responders in all parts of Idaho. We’re working right now to get weekly phone banks going in Coeur d’Alene, Sandpoint and Pocatello.”

The phone banks are held Tuesday and Wednesday evenings at the Idaho Democratic Party headquarters in Boise. Until the phone banks are expanded to different parts of the state, a link is emailed out every Monday to the phone bank for remote responders. These phone banks give us a voice and an outlet for those of us ready to see change in Idaho.

2018 is a year full of hope, promise, and opportunity. We cannot squander it. Join the Rapid Response Team. Help us create change in Idaho. To get started, contact Aryan Parthor aryan@idahodems.org today.