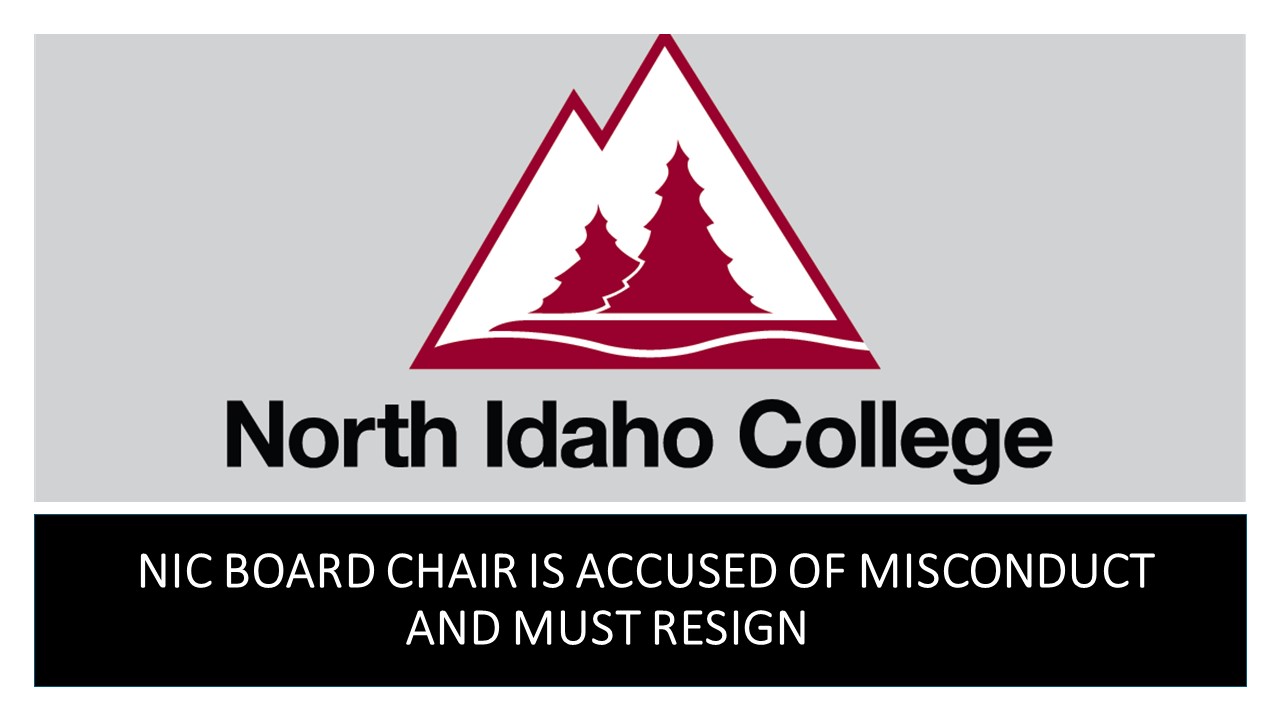 For what a fellow trustee has called a “clear pattern of abuse and aggressive behavior,” North Idaho College Board of Trustees Chair Todd Banducci has been asked to resign immediately.

Penned by 16-year board member Christie Wood, her letter was sparked by an email sent by President Rick MacLennan Monday morning. Through a public record request from The Press, North Idaho College provided the president’s email.

In it, MacLennan detailed five email communications sent by Banducci to the president last Friday that addressed the chair’s “interpretation of (MacLennan’s) contractual responsibilities, board agenda, a directive to constrain student speech, admonishment for (MacLennan’s) performance,” and other items involving the president’s activities.

The president also said he had experienced Banducci’s aggressive and intimidating behavior pattern — specifically “disparaging” MacLennan’s wife as a Hillary Clinton supporter, indicating that the two officials should meet more frequently for Banducci to give the president “marching orders,” and Banducci’s intention to change COVID-19 operating decisions.

“I respectfully pushed back saying these were operational decisions for which I, as president, have responsibility,” MacLennan’s email said. “He responded by saying, ‘that’s right, the board only has one employee — I guess we can go down that road.’ I understand this to mean that he would seek to terminate my employment if I did not cooperate with him.”

MacLennan also described his eyewitness account of Banducci’s physical assault of a female college employee at a college-sponsored event on Dec. 10, 2019. While MacLennan admitted that he had not initially recognized the interaction for what it was, it became clear after the “subsequent learning of the intensity of that assault, the verbal assault that accompanied it, and the ongoing traumatizing impact it has had on this employee.”

The email says that this account, and others, have been reported throughout Banducci’s time at NIC.

“By communicating my concerns about Mr. Banducci’s behavior, I am aware that a door is being opened that cannot be easily closed,” MacLennan wrote. “These concerns are not shared lightly, but out of my deep commitment to North Idaho College, its mission, and the students and communities NIC serves.”

After reading the president’s email, Wood felt it was her job as an elected official to act against college misconduct.

“I feel a legal, and moral, obligation not to remain silent or cover up behavior that could affect the college, employees, and the trust of our students,” Wood said.

In a letter given to The Press by Wood Tuesday afternoon, she describes the “inappropriate, aggressive or threatening behavior from Trustee Banducci” inflicted on or witnessed by board members, faculty, staff, and students for the past eight years.

“The board chair, regardless of any personal feelings, has to work with the entire board of trustees. It’s a position of trust for the college,” Wood said. “His conduct is threatening and aggressive to anyone he disagrees with.”

When asked about the letter, Banducci said calling for his resignation is a continuation of Wood’s attack on his board participation.

“She has been antagonistic toward me since I joined the board in 2012,” Banducci said Tuesday evening. “It appears this is a concerted effort to finally be rid of me because she doesn’t appreciate the questions I ask as I attempt to fulfill my role as board chair.”

She cited one incident in 2012 when Banducci “pointed his finger at [Wood] and said ‘I ought to take you outside right now and kick your ass.”

Howard, a 10-year board member and former vice-chair, agreed with Wood, saying he has seen Banducci’s abuse of the position and authoritarian power. Recently, Howard noted Banducci has been putting pressure on MacLennan to change NIC decisions — like allowing the wrestling team to compete.

“Todd has been acting as if he doesn’t need a vote of trustees,” Howard said. “That’s unhealthy for the good of the institution. He is generating a very difficult time for the president, and his actions are injurious to the institution and the trustees.”

Wood did not reach out to other board members when drafting her letter and said she maintains positive relationships with Howard, vice-chair Greg McKenzie, and Michael Barnes. Contacted by The Press, McKenzie said he’s enjoyed working with all board members since his election and opposes Banducci’s resignation.

“Trustee Wood and Trustee Banducci are very different people that regularly have conflicting viewpoints on the same situation,” McKenzie said. “I think it is wrong for Trustee Wood to call for Trustee Banducci’s resignation. Representatives in government often disagree and challenge each other, yet their constituents expect them to do their job and work for the betterment of all.”

Banducci also referenced his responsibility to the supporters and members of North Idaho College. In his continued position as board chair, Banducci said he aims to benefit the institution greatly.

“I and others hope to effect positive change at NIC while increasing transparency and community oversight. The keyword being oversight,” he said. “Too often, people forget that NIC works for the community, which I represent as a member of this board.”

The next NIC board of trustees meeting is scheduled for Jan. 25 at 6 p.m.