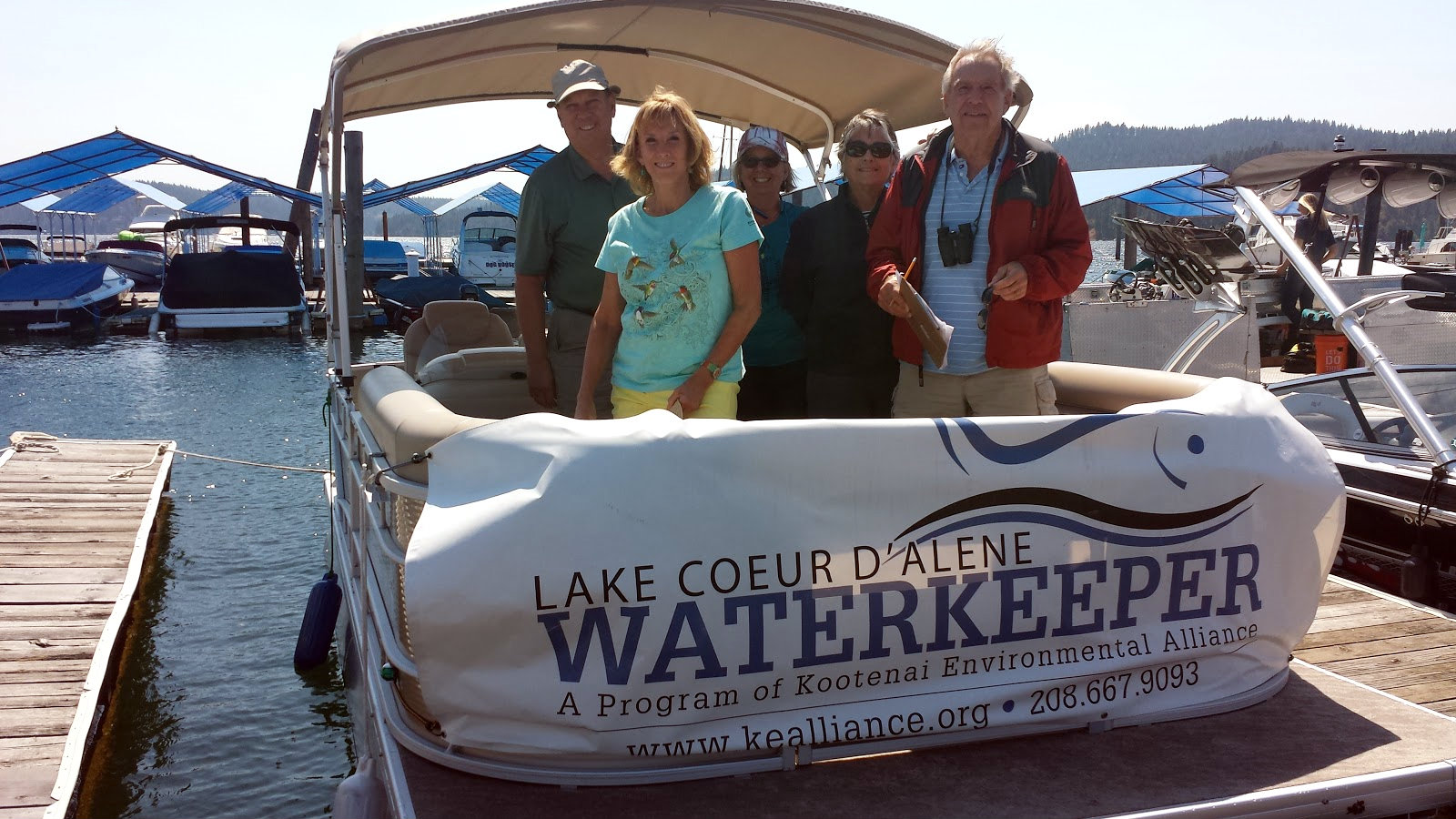 A photo of a group that toured the lake. Photo Credit: Dennis Brueggemann

The Lake Coeur d’Alene Waterkeeper, a partnership between The Kootenai Environmental Alliance (KEA) and International Waterkeeper Alliance, is hosting educational boat tours throughout the summer and into the fall. These boat tours along the shores of Lake Coeur d’Alene inform the public about just these kinds of clean water issues. The Waterkeeper program plans to continue these tours annually to let local people know about the dangers facing the lake, a key economic driver for Kootenai County.

Dennis Brueggemann, a member of the Board of Directors with the KEA, from Northport, New York, and Coeur d’Alene resident for 15 years, hosted the boat tour on August 30, 2017.

“We want to keep our waters—our lakes and rivers—drinkable, fishable and swimmable for future generations. That’s our sort of catchphrase.”

The 2.5-hour tour, which Brueggemann said was flexible to attendants’ time needs, was simultaneously informal and jam-packed with information. Due to the critical and serious nature of the information presented, attendees were both greatly appreciative of the relaxing and serene scenery and seized by a sense of urgency about the sources of pollution that they witnessed.

Comparing the state of Lake Coeur d’Alene at the time of the tour with that of Fernan Lake, Brueggemann observed, “You can’t swim in Fernan, you don’t want to eat the fish in Fernan, and you definitely don’t want to drink the water in Fernan.”

At the many stops along the tour attendees learned to recognize and diagnose the risks of dying trees, non-native trees, and unauthorized trails on Tubbs Hill; street drainage; unnatural shore-side lawns likely treated with unsafe fertilizers; improperly applied or absent buffering for yard runoffs; abandoned docks; and Eurasian Watermilfoil that depletes oxygen for native fish and organisms.

Along with a sense of urgency is a sense of history. Attendees learn about the history of KEA victories, such as its role in keeping Tubbs Hill public; helping Kootenai County Parks and Waterways install No-Wake Zone buoys to demarcate Cougar Bay; preserving osprey piling habitats; and getting the city of Coeur d’Alene to stop boats from dumping drain water into the lake. 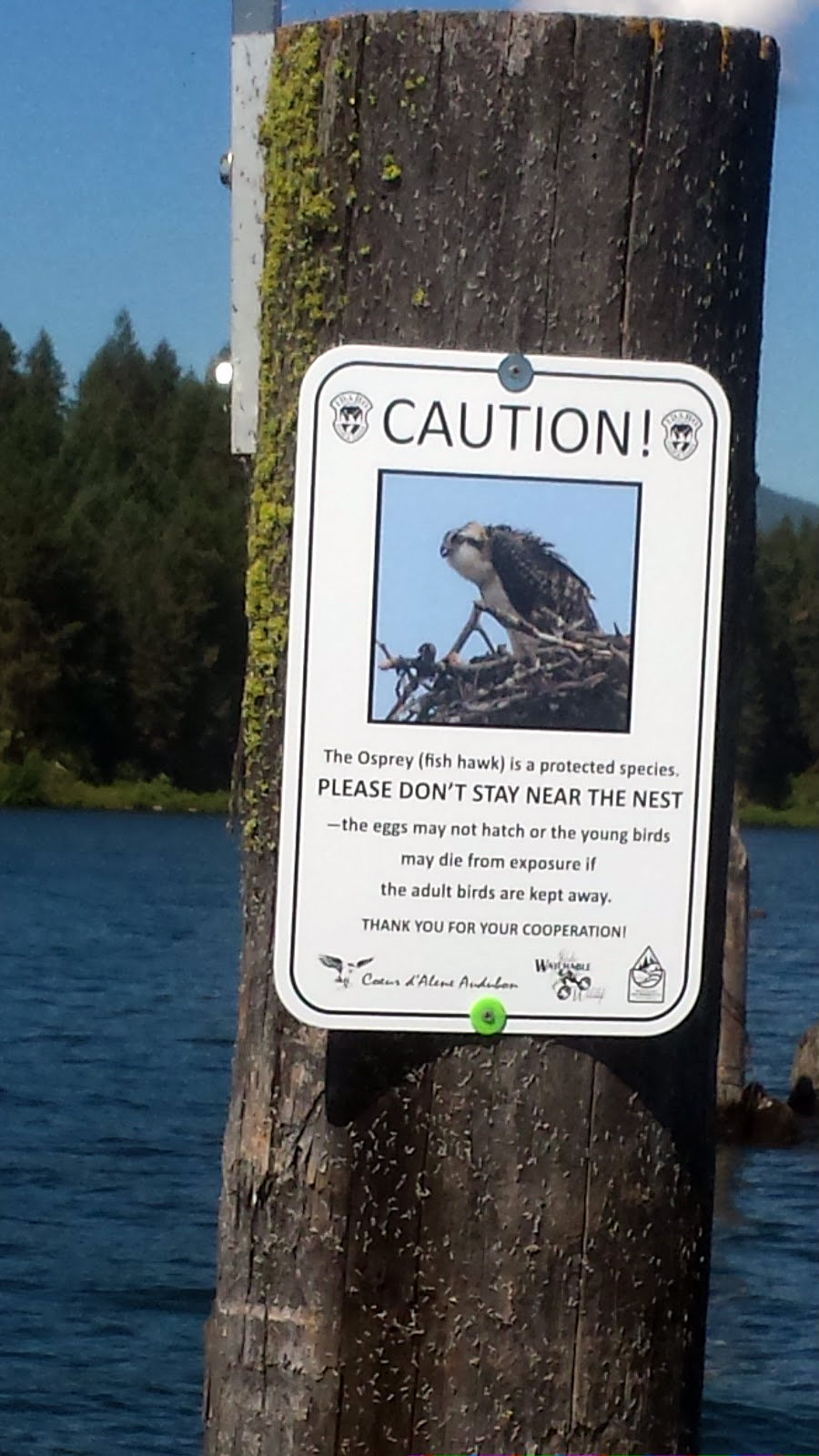 “One of our KEA volunteers last year was following one of these large tour boats which was  dumping its drain water into the lake.  And then we discovered they’re all doing that for years!  So we contacted the EPA at the state level and said, ‘You need to talk to The [Coeur d’Alene] Resort.’”

After litigation The Coeur d’Alene Resort agreed to install a public dump station.  “We’re now hoping to educate all boaters.”

The KEA’s current goal is mostly education for homeowners, developers and students.

“Education is what we’re really pushing for now,” Brueggemann said, “and we definitely want to educate developers, permit issuers, and the landowners themselves. Because it’s really the only way we can get them on-board and prevent some of this destructive shoreline development that’s taking place around this lake. There’s a lot of this going on. And I have to stress that we may be at fault for not giving enough education to people before they start developing the land. So it’s a long-term project. We’re looking for partnerships with people and organizations that are tied to the shoreline to get them on-board: homeowners’ associations, shoreline associations.” 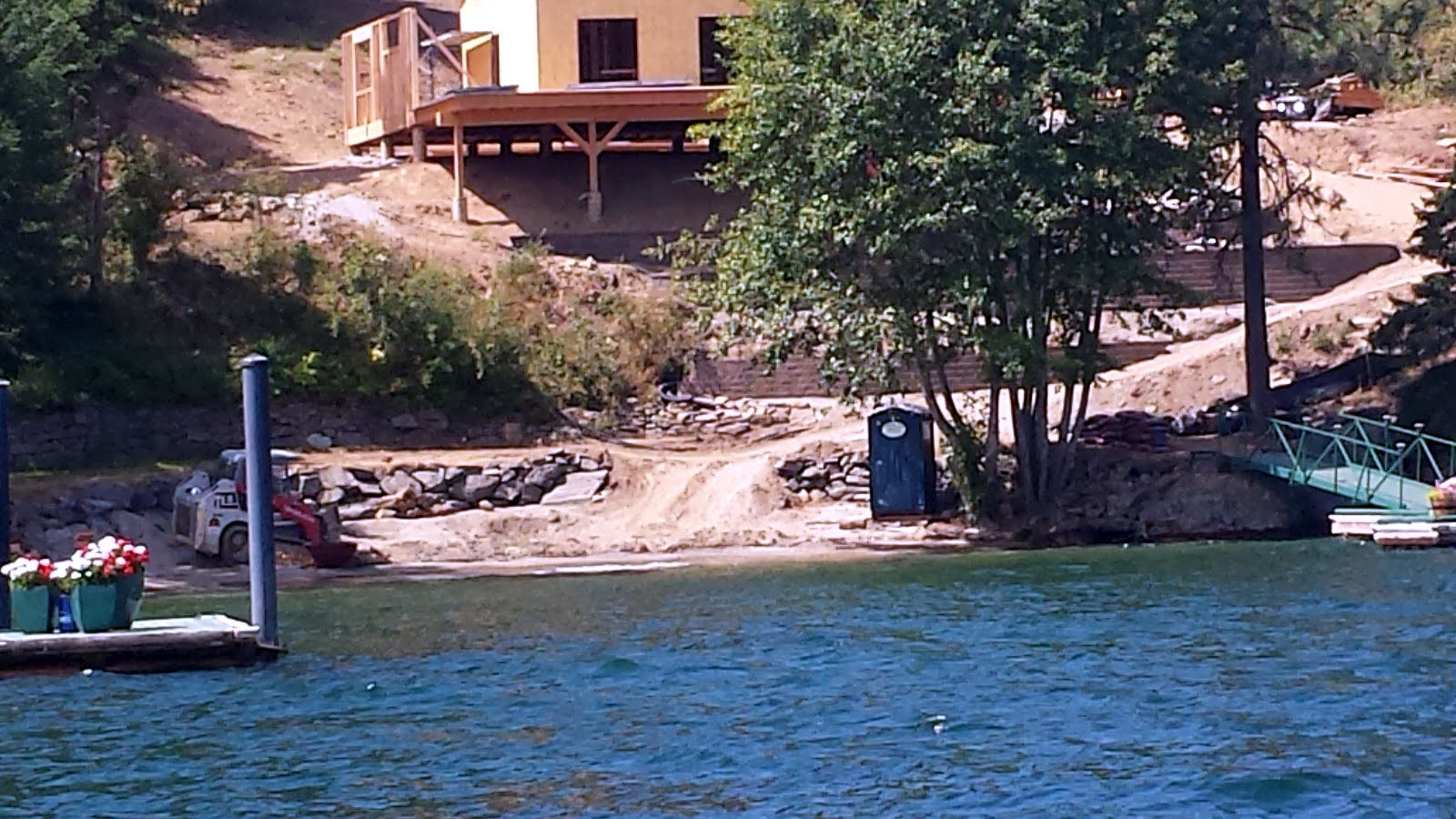 A property under construction with a lack of proper lakeside buffering. Photo Credit: Dennis Brueggemann

Brueggemann hopes to eventually see a standardized environmental educational curriculum in our schools.  The KEA has gone to schools with 3D models demonstrating how the CDA basin watershed works.

Brueggeman continues, “There’s a lot of effort being made now to monitor the quality the water on a regular basis.  We were just talking today about activating a process with some schools that can help us take samples and do testing, etc. That has been going on for many years but I think we need to do more of it.  We want to look at the quality at different levels of the lake and the river. There’s a lot of toxic residual debris from the mining area at the bottom of the lake which needs to stay right there. We need to assure that levels of dissolved oxygen remain sufficiently high enough at other levels of the lake to keep (toxic material) from mixing with the water.”

This tour is well worth your time.  For anyone interested in taking a Waterkeeper Boat Tour this fall, more information is here.  A reservation for the next date can be made by calling or emailing the KEA office.