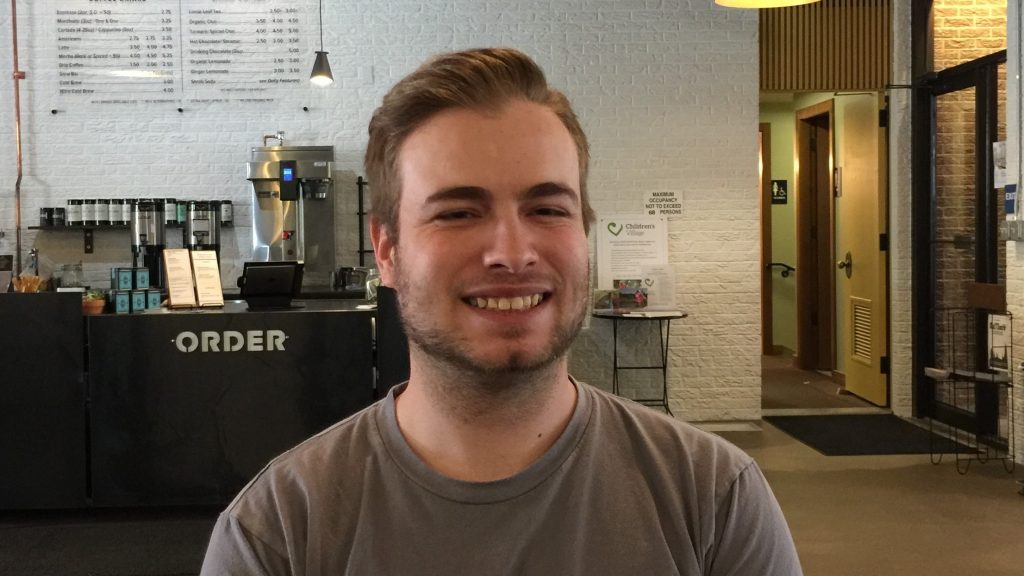 The Kootenai Democrats proudly welcome Matt Kilburn. The Central Committee selected Matt to be our new 2018 field organizer. Hiring Matt signifies an important investment in our Party. It also supports our goal of getting our Democratic candidates elected this year.

As Field Organizer, his role centers on recruiting and working with volunteers. The volunteers will be tasked with making phone-calls and person to person contacts to identify and turn out voters in November. Promoting the Democratic Party and getting Democrats elected is his mission. By leveraging the Kootenai Democrats assets and organization, Matt’s team will identify and document the voters who support our candidates. Ultimately, this effort will help ensure that sufficient voters turn out and vote for Democrats for local and statewide office.

Since his arrival in Coeur d’Alene, he has hit the ground running. One of his first actions was a meeting with Bev and Steve Moss. They met over coffee at Evans Brothers Coffee. During their conversation, Matt explained what he hopes to accomplish in the next six months.

Matt is a recent graduate from from BYU – Idaho. Two weeks ago he received his BS in Political Science. Although his interest in politics has been a constant, his political views have evolved. In fact, Matt grew up in a solidly Republican, Mormon family. Growing up in a conservative household, it is not surprising that his family supported GOP candidates. Yet, as Matt matured, he recognized that his personal political leanings aligned with the values of the Democratic party. He especially identified with the ideals of equality and civil rights. Not surprisingly, by 2016, he ardently supported Bernie Sanders.

Not His First Rodeo

Some of you may have heard of Matt. In the fall of 2016, he held the position of IDP field organizer in Sandpoint. During his tenure, he succeed in meeting his canvassing goals. Unfortunately, disgruntled locals created an unsafe environment which compelled the IDP to remove him for his own safety. Despite this less-than-positive experience, Matt remains committed to field organizing. “It is very rewarding to see people come out and believe they can make a change,” he says. “The energy they bring trying to make that change in their community energizes me!”

To read more about the incident, refer to this article by the Spokesman-Review: http://www.spokesman.com/stories/2016/oct/07/dems-pull-worker-out-of-bonner-county-charge-haras/.

During the interview process, Chair Paula Neils noted Matt’s experience and education.  “Matt has been preparing himself for this type of work for a long time. We also have gotten to know him in the past year since he was in Sandpoint before the election and has been present at state Dem events. He was preparing lists even before he arrived in Cd’A last week.”

Therefore, when Matt calls you to assist with this important effort, make sure that you make a real effort to help. Moreover, please get to know this enthusiastic, dedicated young man. As a field organizer, the Kootenai County Democrats are very lucky to have him!