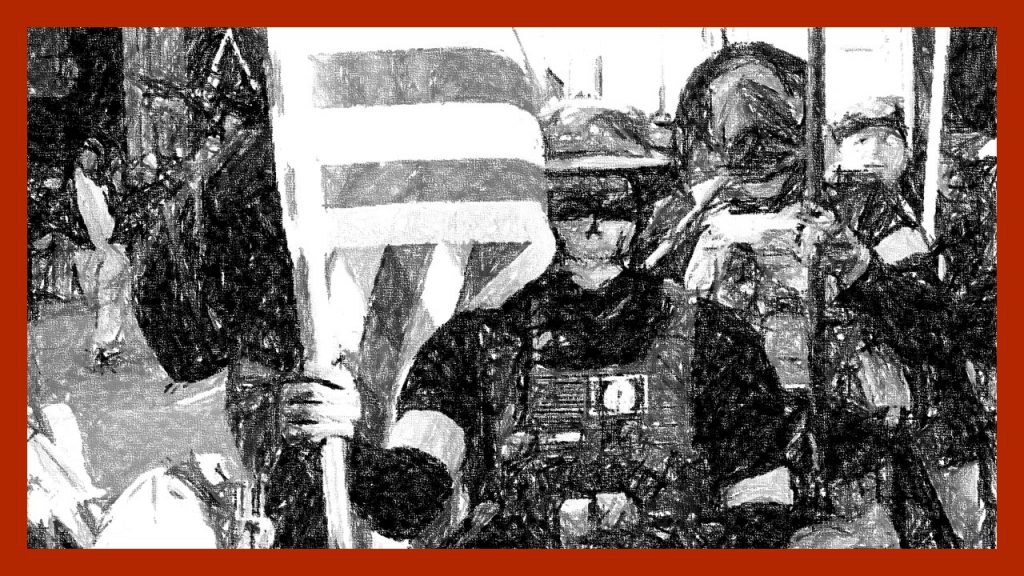 BOISE — A far-right group launched by antigovernment activist Ammon Bundy is rapidly expanding nationwide and making inroads into Canada, according to a new report from the Institute for Research and Education on Human Rights.

The quick growth happened despite legal problems faced by some prominent People’s Rights leaders, and continued even as some of the organization’s Facebook groups were removed from the social media platform. The organization has grown by roughly 53% in the past year in large part because of continued anti-public health sentiment, according to the report.

People’s Rights started in deep-red Idaho, which remains one of the least-vaccinated states with only about 43% of its population fully vaccinated against COVID-19, according to the U.S. Centers for Disease Control and Prevention. The group now includes activists in 38 states, according to the report.

“I think the report underestimates their overall strength, because they’ve also built out alliances with a range of groups from the Tea Party to the Proud Boys and anti-vax groups,” said Chuck Tanner, IREHR’s research director. “In certain places they are able to mobilize at levels that make an impact on policy.”

People’s Rights started in 2020 amid a wave of backlash against public health measures taken at the start of the coronavirus pandemic.

Started by Bundy — who is best known for leading a group of armed activists in the occupation of an Oregon wildlife refuge in 2016, and now is one of many candidates running in Idaho’s gubernatorial race — the group frequently staged protests at public health districts, state Capitol buildings, schools and public officials’ homes. The IREHR report analyzed internal membership data from the People’s Rights network.

Bundy did not immediately respond to phone and email messages left by The Associated Press.

Last year, the organization had just under 22,000 members nationally, according to a report by IREHR and the Montana Human Right’s Network. Now it has grown by roughly 53%, according to the new IREHR report, with more than 33,000 members including nearly 400 official leaders in 38 states. It also includes more than 100 members in Canada — largely in Ontario — even though most of its political ideology centers on fringe interpretations of the U.S. Constitution and Christian nationalism, according to the report.

“We noticed three or four months ago that they started having Canadian provinces listed on their website.

It’s not big, but it’s kind of strange,” Tanner said.

People’s Rights is still mostly focused in the northwestern states, particularly Idaho, where Bundy lives and roughly 17 out of every 10,000 are members, according to the report. Most of the growth has been around COVID-19-related activism, said Tanner.

“There’s been rapid growth in places that didn’t have very many members to begin with, but there’s also been significant growth in areas that we know are really organized on the ground, like southern Washington and central Oregon,’ Tanner said.

‘They’ve really built this COVID-denial activism, and as a group are playing an outsized role in the attack on public health measures to address the pandemic.”

Prominent members of the organization have faced serious legal woes. In Idaho, Sean Anderson dropped from a leadership role after he was sentenced to 18 years in prison for his role in a police shootout last year.

Another prominent People’s Rights activist, Pam Hemphill, is facing several federal charges after prosecutors said she took part in the Jan. 6 insurrection at the U.S. Capitol. Hemphill has pleaded not guilty to the charges.

Earlier this year, Bundy was convicted of trespassing and obstructing officers after prosecutors said he refused to leave a closed room at the Idaho Statehouse following protests that were attended by hundreds, including many People’s Rights members.

That hasn’t seemed to slow the organization’s growth, Tanner said.

The organization has promoted extreme political concepts including state secession and the repeal of the 14th, 15th and 19th Amendments, Tanner said. The People’s Rights website calls on members to be ready to defend themselves and others against government officials.

“What People’s Rights does is spread really radical ideas about overturning civil rights in the United States,” Tanner said.

“This is a broad-based, anti-Democratic and bigoted social movement.”

But Joe Lowndes, a political science professor at the University of Oregon who researches conservatism and right-wing movements, said it’s not clear if the organization’s growth will have staying power in a post-pandemic world. “People’s Rights were kind of early adopters of the anti-mask, antivaccine movements, and they’ve been able to build through that to push this vague, conspiratorial, anti-government idea,” said Lowndes. “But it’s hard to say how that’s able to sustain itself in the long run. I can’t see that there’s much staying power beyond the issue of the pandemic, unless it’s kind of that general, apocalyptic-prepper stuff.”

In places like Idaho, where some far-right political factions already had a stronghold, it’s difficult to tell if People’s Rights was leading the anti-pandemic movement or just going along with the far-right flow, said Jaclyn Kettler, a Boise State University political scientist.

“It’s a little hard right now to trace what impacts they had compared to others with similar sorts of ideologies,” Kettler said.

“It will be interesting to see what happens long-term here. For instance, a lot of the Tea Party organizations aren’t active like they were in 2010, but we can still see the influence of them.”

Ammon Bundy speaks to a crowd of about 50 followers April 3 in front of the Ada County Courthouse in downtown Boise. A far-right group launched the anti-government activist Bundy is rapidly expanding nationwide and making inroads into Canada, according to a new report from the Institute for Research and Education on Human Rights.

The AG advised McGeachin on June 7 to immediately turn over the unredacted task force documents to the Press Club. She obviously refused, leading to the lawsuit.

It is hoped that Mr. Macomber will take to heart the lessons he should have learned from this sordid affair, if he still wants to be Idaho’s chief legal officer — study the law and obey it, speak the truth, make sure your arguments are based in fact, and don’t tell public officials what they want to hear instead of what they should hear in order to obey the law.

Otherwise, he should find some other career pursuit.

Jim Jones is a Vietnam combat veteran who served eight years as Idaho Attorney General (1983-1991) and 12 years as Justice of the Idaho Supreme Court (20052017). He is currently a regular contributor to The Hill online news. He blogs at JJCommonTater.