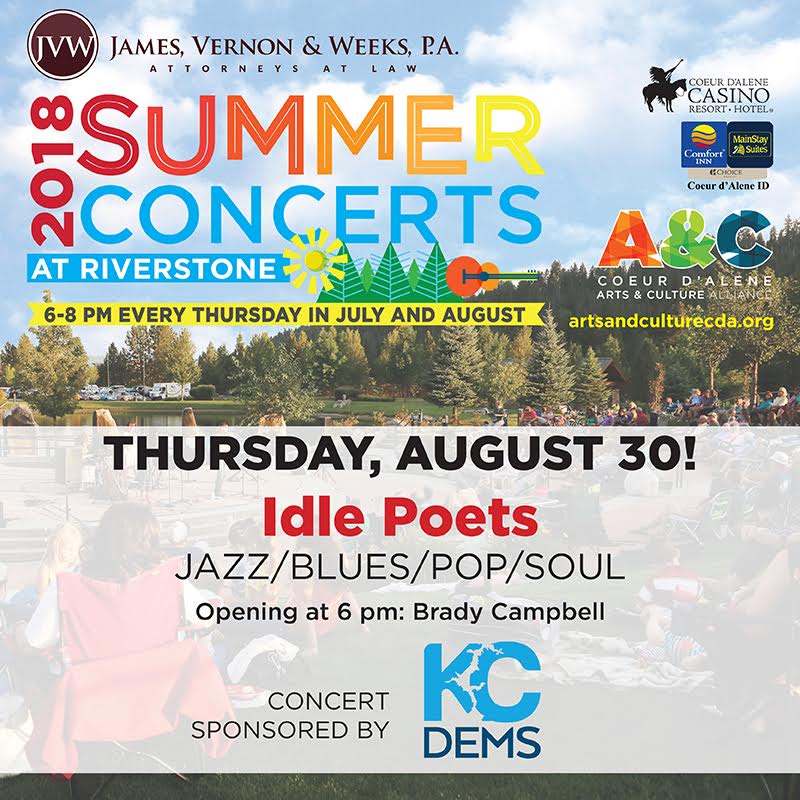 The Kootenai Democrats believe in our community. Furthermore, we believe that our message of tolerance, inclusion and equal justice will resonate with voters. Consequently, we are working on different ways to spread our message. For example, we are proudly supporting the summer concert series at Riverstone to increase our visibility. By sponsoring a concert, we intend to raise awareness of our organization while helping to finance a popular community event. To be specific, the Kootenai Democrats are the event sponsor for the August 30 concert. This final concert of the season features the Idle Poets. Come meet your local candidates and support the KC Dems by buying a root beer float at our booth. Bring a blanket or a chair, and plan to kick off your shoes and dance! It’s the last concert of the summer at Riverstone, so don’t miss the fun.

The Summer Concert at Riverstone is a popular weekly event. During the months of July and August, the series offers a unique concert each Thursday. To be specific, the featured musicians present free music from the amphitheater at the Riverstone Public Park. The park is located at 1805 Tilford Lane in the Riverstone Development. The Coeur d’Alene Arts and Culture Alliance organizes this annual series.

The Coeur d’Alene Arts & Culture Alliance promotes and establishes  Visual Arts, Performing Arts, Written Arts, Cultural Arts, and Education for the Arts in the Greater Coeur d’Alene Area. In addition, the organization is also dedicated to providing valuable networking opportunities for those involved and seeking to be involved in the arts.