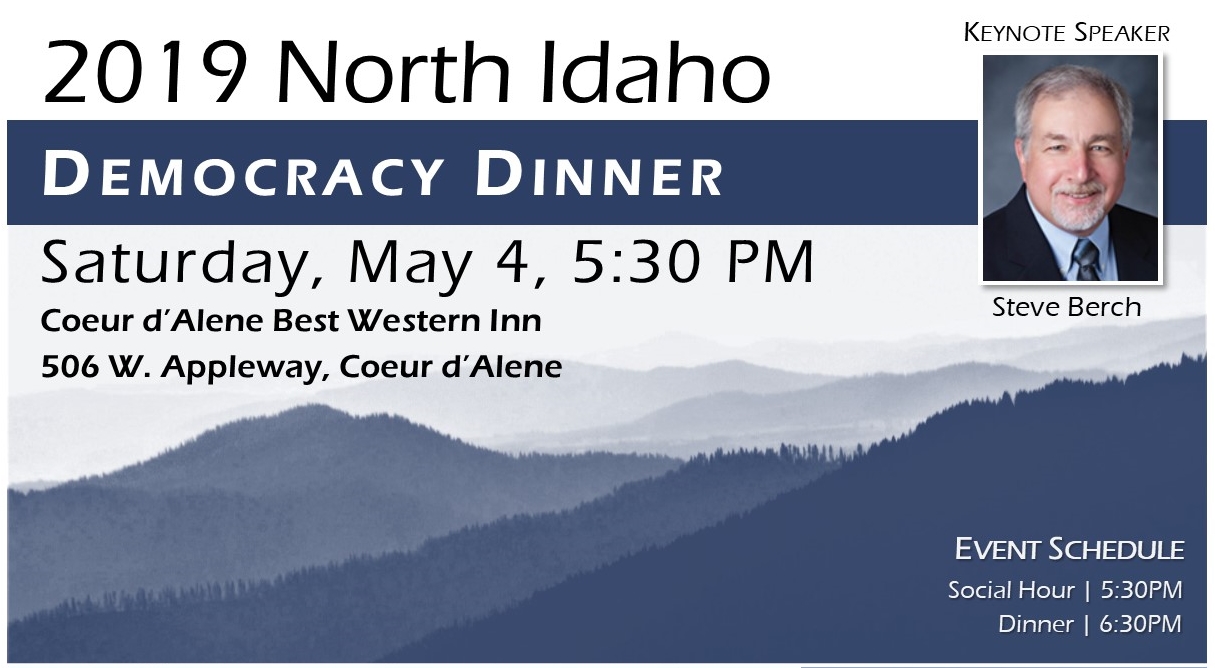 The evening also features the 2019 Art Manley Lifetime Achievement and Rising Star Award; a Silent Auction;  and an opportunity to support KCDCC’s efforts to support candidates.

Tickets are $50 per person until April 20, and $60 thereafter, and $500 for a reserved table of 8 near the stage.  Reservations must be received by April 29.  For more info, contact kootenaicountydemocrats@gmail.com

The dinner entree is Chicken Wellington, with a side salad and dessert.  Contact Cindy at kootenaicountydemocrats@gmail.com if you have dietary restrictions.

Steve Berch was born in Brooklyn, New York.  He received a Bachelor’s degree in Marketing from the State University of New York at Albany in 1976 and worked on the East Coast until attending the University of Minnesota where he earned an MBA. Recruited by Hewlett Packard’s Disk Memory Division, he moved to Boise in 1981. Steve has lived in what is now District 15 (West Boise) ever since.

During his 37-year association with HP, Steve worked in Information Systems as a COBOL programmer and Data Center manager. He moved to marketing where he led several sales and marketing programs, including managing a multi-million dollar reseller channel, conducting the strategic planning process for several HP divisions and leading several global Customer Relationship Management initiatives.

Steve briefly left HP in 2008 when he was part of a workforce reduction, or as Steve likes to say, “HP decided he was too valuable.” He returned to HP in late 2010 as a contract worker and was employed as such through October 2018.

Finally in 2018, running for the fifth time, he won by receiving 54.5% of the vote against a 12-year incumbent in a part of Ada County that hadn’t elected a Democrat since the Earth cooled. Steve took the oath of office for District 15 House Seat A on December 6, 2019 and serves on the Education, Business and Local Government committees.

Married for 35 years, Steve and his wife Leslie met in Boise. Their daughter, Katie, is finishing a degree in sociology at Boise State University.