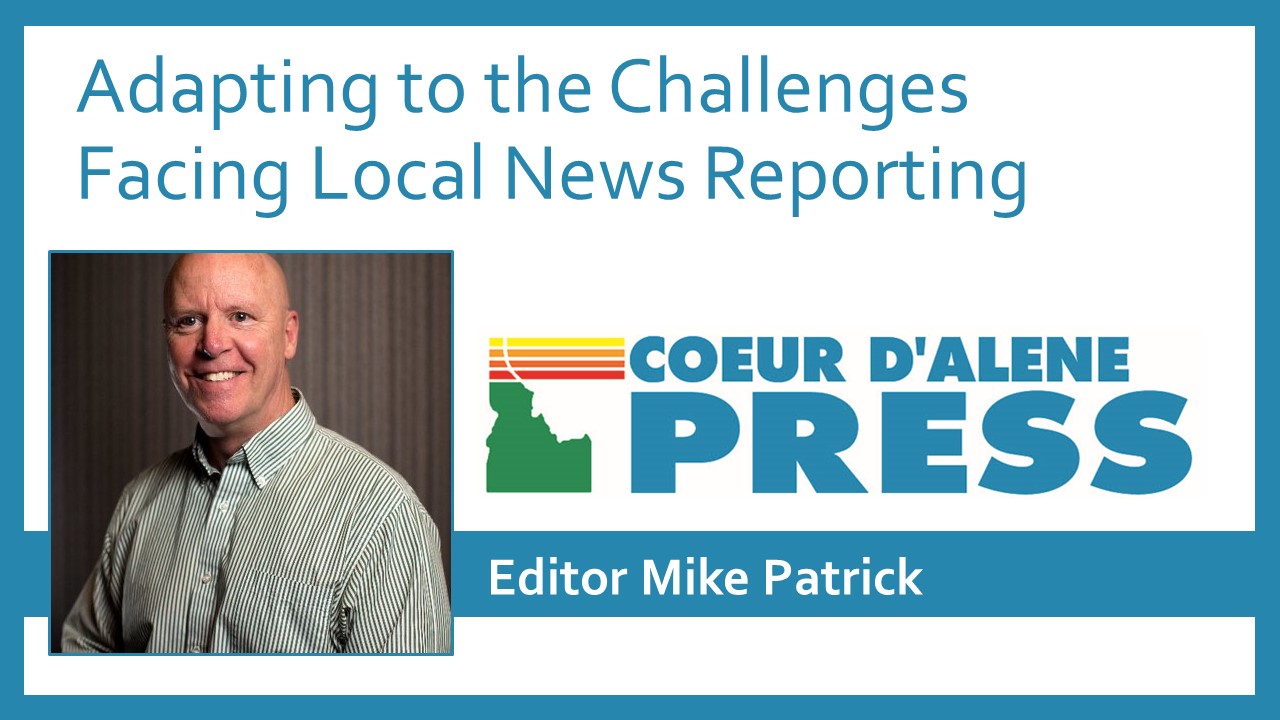 Local newspapers are on the decline. Fortunately, here in Kootenai County, we have one that continues to survive. Nonetheless, the Coeur d’Alene Press still faces many challenges. To better understand the forces affecting the gathering and reporting of local news, we invited CDA PRESS Editor Mike Patrick to join us. Get a first-hand look at what Mike deals with every day as an editor of a community newspaper.

Here at the club, we have had the good fortune to meet many of our local reporters. For example, CDA Press reporter Devin Weeks presented his reporting on the paranormal. In addition, CDA Press reporter Craig Northrup shared his reporting on the militia gathering downtown during the time of the national Black Lives Matter Protests. Unfortunately, both reporters have moved on, leaving Mr. Patrick with holes to fill in his roster. Another challenge is adjusting to the death of owner and long-time publisher, Dwayne Hagadone. Luckily, we have an editor who remains committed to keeping our local paper functioning despite these headwinds. We are grateful to him and know he is up to the task.

Join the Democratic Club this Friday, August 20th, at noon, ONLINE ONLY.

We distribute a Zoom link for our club meeting on the Thursday prior to the meeting date. To request the link or assistance getting connected, contact Phil at pjwmia@aol.com.

Also, find videos of past Club meetings at KootenaiCountyDemClub.com/Meeting Videos. 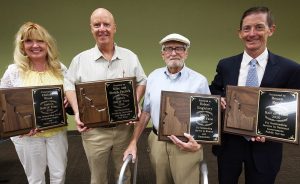 Mike Patrick has been editor of the Coeur d’Alene Press since 2001. Prior to that, he held the top newsroom job at the Daily Herald in Provo, Utah; the Arizona Daily Sun in Flagstaff; and the Daily Record in Lawrenceville, Illinois. During a career spanning 40 years, Mike has won first place feature-writing, editorial writing, news writing and public service awards. Mike is a University of Arizona journalism graduate. He and his wife, lawyer, and columnist Sholeh Patrick, have four adult children.

On August 12, 2021, the Idaho Hall of Fame inducted Mike and his wife Sholeh. They were among seven local dignitaries to receive the honor. Among the other local recipients were Christie Wood, Robert Singletary, and Bruce Reed. The inductees not captured in the photo are Dr. Jack Riggs and the late Fr. Bill Wassmuth. For long-time locals, these are all familiar and deserving individuals.