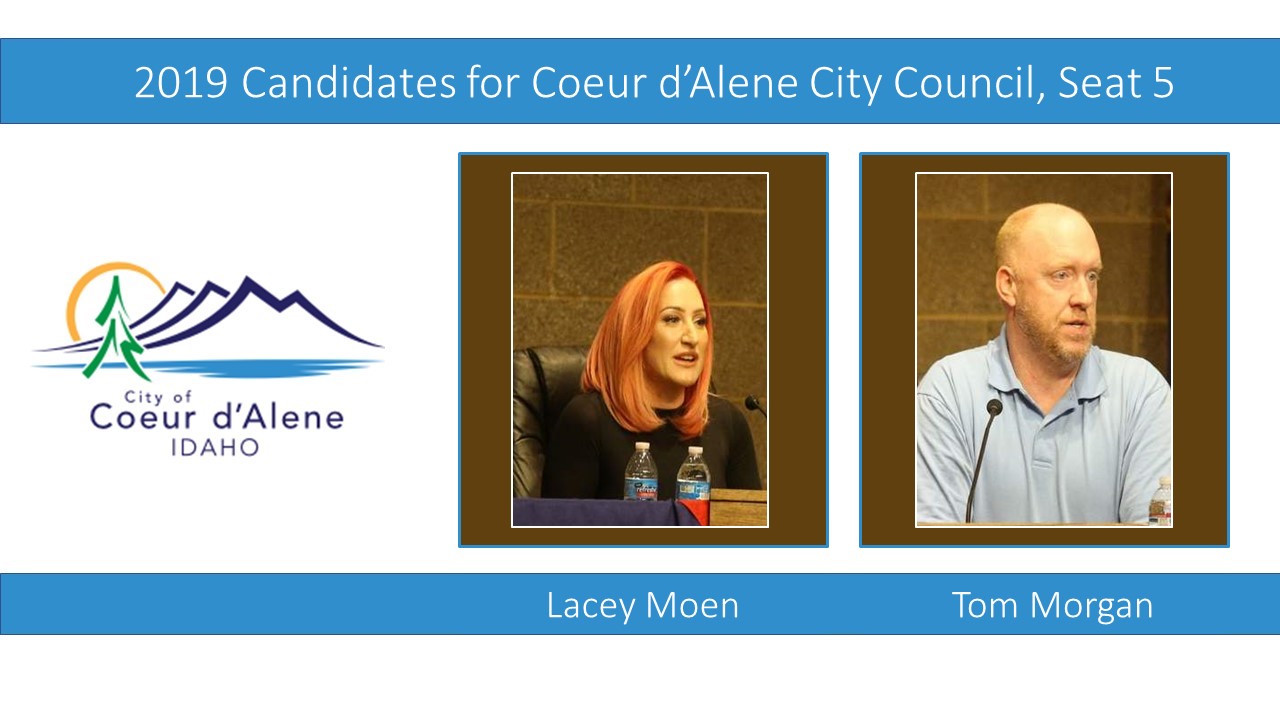 The day after Halloween, Friday, Nov. 1st, has Lacey Moen and Tom Morgan, two candidates seeking election to Seat 5 on the Coeur d’Alene City Council addressing the club. Both candidates will have the opportunity to explain why each is running and what they hope to achieve. They are running against Dan English who currently holds this seat and who is seeking re-election. This is not a debate but an informational opportunity for the two candidates. There will be time for questions from the audience.

At 36, Moen said she would offer a fresh perspective on the council while helping to significantly improve communication. “The median age in Coeur d’Alene is 36.4 years. and if you look at the demographic on the council it does not represent who is living here right now,” she said. With little experience in politics, Moen sees herself as a communicator and a quiet observer who is able to connect with the younger generation. “I feel like the middleman getting and sharing accurate information,” she said. “I don’t want to be an influencer, I want to be an informer.”

Moen believe she can better connect with citizens and keep them informed about the important issues facing the city. In today’s fast-paced world, Moen said she would support new ways of sharing information. For example, she would offer 30-second online council meeting recaps that explain city happenings in a more palatable forum. “I would support more nontraditional avenues of communication like social media to connect with people,” she said. “It would be really nice to be able to get more and more and more people involved with consistent and understandable information.”

While he appreciates the public service of the current city council members, Tom Morgan said he would offer a voice for the people of Coeur d’Alene who feel they aren’t represented. Morgan, 51, operates Lake City Bicycle Collective, a nonprofit that repairs and donates bicycles to kids who can’t afford one. To date, he said, the business has donated more than 700 bikes and hundreds of helmets to the under-privileged. A member of the city’s Ped Bike Committee, Morgan said he has worked closely with elected officials and believes they are receptive to the citizens. “I think we need to tap the brakes on this bus and take a pause,” he said. Morgan said it’s a critical time to update the city’s comp plan and the council must consider public input from all sectors as part of the process.

For more than 30 years, Morgan worked in the heating and air conditioning industry. As a result, he said he is “squarely in the middle” of the income bracket and believes he would provide a strong voice for the blue-collar sector. “I think every person on the council, including the mayor, cares about the city,” he said. But more can be done to control growth and to enhance the community’s livability for people from all walks of life. “I don’t own any property. I rent a house,” he said. “And the way things are headed, home ownership is getting tough. For local people to get into a home right now is a real stretch.”