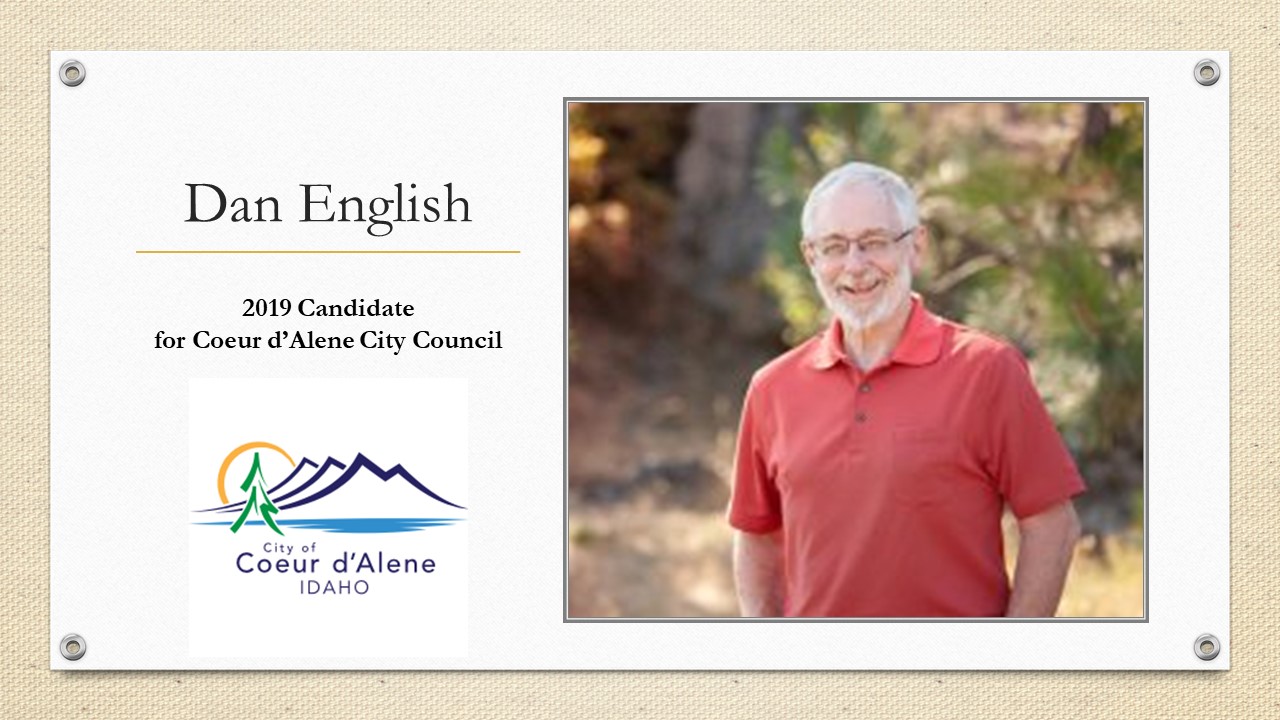 This Friday, we will have a familiar face speaking to the Democratic Club. Our guest speaker is Dan English. Dan is an incumbent candidate for Coeur d’Alene City Council.

If Coeur d’Alene selected a Mr. Coeur d’Alene, Dan English would be our guy. He literally has done it all. Dan has served as both the County Clerk and a City of Coeur d’Alene City Councilman. It is time for him to seek reelection and he will be at the club. Dan will tell us what he and the Council have achieved and hope to continue to do for our community.

Dan English was born in Coeur d’Alene and graduated from Coeur d’Alene High and North Idaho College before gaining his advanced degrees. He has a lifetime record of service to his community. Dan is the founder and former Executive Director of two local non-profits, North Idaho Youth for Christ and Anchor House-Idaho Youth Ranch. He recently retired as the Director of the Area 1 Agency on Aging, a Department of North Idaho College. His retirement will free up more time to devote to his current passion, his city council duties.

Dan served as a Licensed Professional Counselor for over 25 years. In addition, he has held positions as a sheriff’s detective, a school board member and an adjunct faculty member at LCSC. At LCSC, he worked in the Justice Studies and Social Work programs. Dan has also served as a volunteer fireman and is a graduate of the Idaho P.O.S.T. Academy for sworn law enforcement personnel.

Voters elected Dan to the Coeur d’Alene City Council in 2015. As a member of the council, he serves as the council liaison to the parking commission and was appointed by the Mayor to our local urban renewal board, Ignite CdA.

During his tenure as County Clerk, Dan served as the President of the Idaho Association of County Recorders and Clerks. In addition, he served as Chair of their legislative committee and as a member of the Idaho Association of Counties Legislative Committee. Dan was very active in the elections community at the state and national level. He was on the Idaho Secretary of State’s Election Task Force and was elected Chair of the 110 member Standards Committee of the U.S. Election Assistance Commission which had representatives from all 50 states and the U.S. Territories.

He and his wife Cory raised four children and have eight grandchildren and one great grandchild. Two of his children were active duty military and served multiple tours in Iraq. They are active members of Calvary Lutheran Church in Post Falls. He holds a Bachelor’s degree in Criminal Justice Administration from San Jose State University and a Master’s degree in Counseling Psychology from Gonzaga University.

Nothing else needs to be said. Dan is our man based on his resume alone. This Friday, 9/13 at noon be at the Democratic Club to hear Dan English. He truly is a quiet, unpretentious man with a great love for our community. Be there to support Dan English in his re-election bid for CdA City Council.

So come meet Dan at the Iron Horse this Friday and find out why is deserves another term on the CdA City Council.