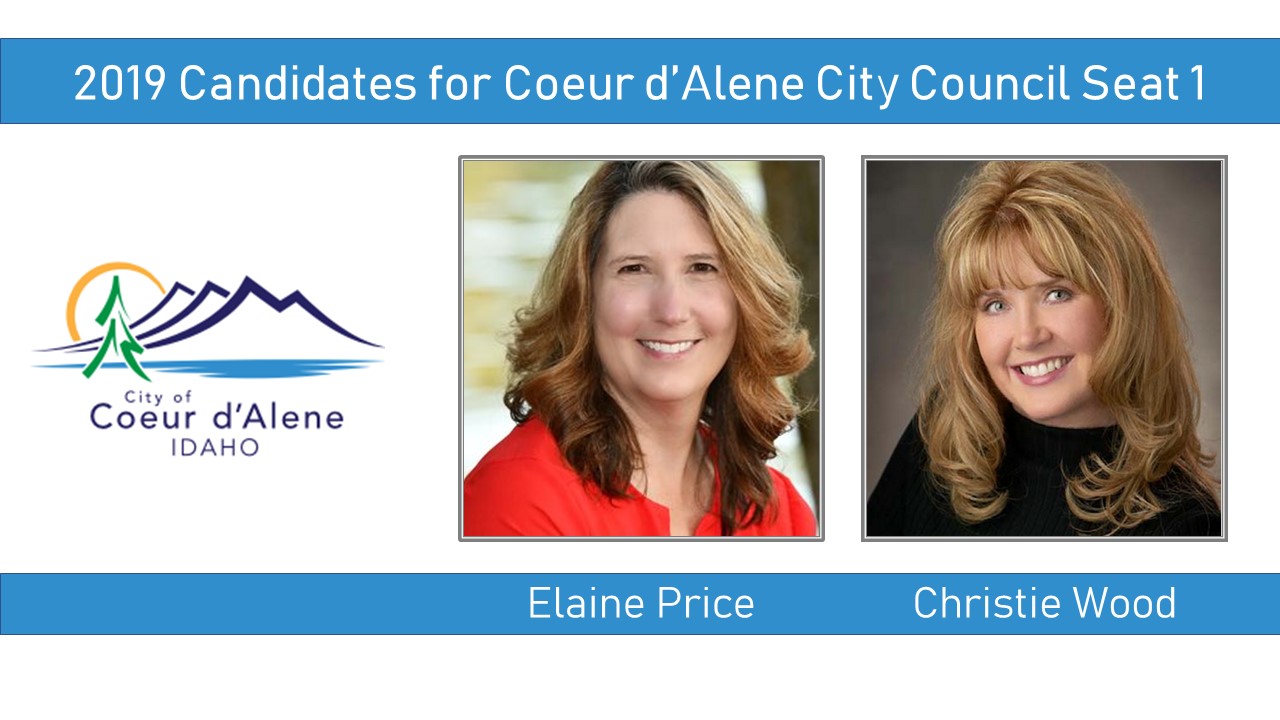 The Democratic Club welcomes two candidates who are seeking a position on the Coeur d’Alene City Council. The candidates are Elaine Price and Christie Wood. They are competing to fill seat 1 on the council. This seat is open because incumbent council member Ron Edinger is retiring. Come meet Elaine and Kristie. This is your opportunity to be an informed voter. This is not a debate but an opportunity for the candidates to inform us and for us to learn. After each tells us why they are running there will be time for questions from the audience. Each will have a chance to answer but not to rebut each other.

Information on each is listed here based on alphabetical order.

Elaine Price tells us on her website about her background and reasons for running.  Price and her husband own and operate Spartacus Coins Bullion Collectibles on Sherman Avenue downtown. Price is a former bookkeeper and office manager and currently serves as a financial leader for her church in downtown Coeur d’Alene.  Born and raised in Iowa, Price moved to Coeur d’Alene in 1990. She has two sons, a North Idaho College graduate and an Army veteran.

“My focus will include the development of a comprehensive plan,” she said. “It will provide direction for growth, development and management of sustainable community services such as parks, transportation, and workforce housing — housing that young adults or working adults can afford.”

Christie Wood provides the following information on her background and her reasons for running.  Wood retired from the Coeur d’Alene Police Department in 2015 after nearly 30 years of law enforcement experience as a police officer and sergeant. She previously served for eight years on the Coeur d’Alene School District Board of Trustees and is presently in her 15th year of service as a member of the North Idaho College Board of Trustees. Wood has served for the past two years on the Coeur d’Alene Park and Recreation Commission. Christie has been a member of the Kootenai County Task Force on Human Relations since 2007, filling the law enforcement seat. She has served as president of the organization for the past nine years.

“I believe those positions demonstrate that public service is at the core of who I am. The voters and residents of Kootenai County and the patrons of the Coeur d’Alene School District have given me the honor and privilege to serve them in these important elected positions for several terms,” Wood said. “I would give the same dedication and time in this new role as a member of the Coeur d’Alene City Council.”

She is married to her husband David Wood and her son is Bryan. She has a Bachelor’s degree in Justice Studies and a minor in media relations. Her interests are education, public policy, and public governance. She enjoys walking her dog on the City trails, gardening, and traveling to visit her son.

She said that if elected on Nov. 5, she will bring these previous experiences — in a variety of public policy decision-making roles, especially in the area of budget planning and management — to her new role as a member of the Coeur d’Alene City Council.