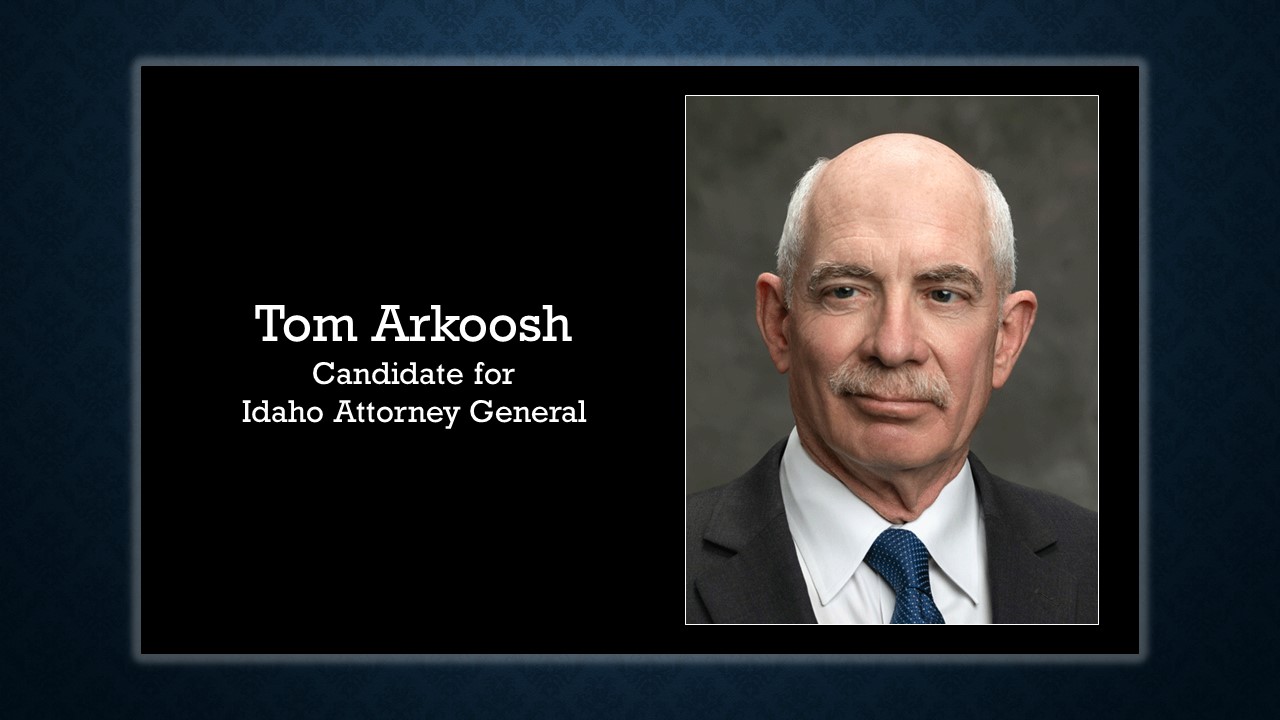 Arkoosh ready to take on Labrador

Tom Arkoosh believes politics have no place in the office of attorney general.

“Once you take the oath, it’s a nonpartisan position. The law is the law,” Arkoosh said Friday during an interview at The Press office in Coeur d’Alene.

“The job of the attorney general is the objective application of the rule of law for things that matter to the people of Idaho,” he said. “My opponent sees the office differently.”

Arkoosh, of Boise, was politically unaffiliated his entire life until he registered as a Republican to vote in the May 2022 primary election.

When longtime Idaho Attorney General Lawrence Wasden lost the nomination to Raúl Labrador and Steve Scanlin withdrew from the race for personal reasons, Arkoosh was approached by leaders of the Democratic party to join the race and give Idahoans a choice in who their next attorney general would be.

“I felt it was very important that there be a two-party system,” Arkoosh said. “There’s a very clear choice between the two of us.”

Arkoosh said Labrador wants to ensure conservative legislators — “the radical right of the Republican party” — have a partner in the attorney general’s office.

A fourth-generation Idahoan, Arkoosh studied at Harvard University and graduated with his law degree from the University of Idaho. He has spent 44 years as a lawyer, as both a prosecutor and defense counsel.

This is Arkoosh’s first time running for public office. Despite his opponent’s name recognition, Arkoosh is ready to take on Labrador in this race.

“His manner is constructed to hide what he means,” Arkoosh said.

“Those, to me, are not Idaho values,” Arkoosh continued. “Idaho values are in fact in the federal and state constitutions and enshrined in our statutes. Those are the guidebooks, and I think the attorney general needs to stick to that.”

Arkoosh said he recalls when the Republican party was the party of small government, with a motto of, “He who governs least governs best.”

“A wing of today’s Republican party wants to govern every aspect of our lives,” Arkoosh said. “The values that Labrador espouses, the loss of liberty, are not Idaho values. Those are cultural values held by the radical right of the Republican party. They hold those values for reasons I don’t comprehend, but they’re not freedoms. They’re reaching into emergency rooms, into bedrooms, into your bookshelf, into your school room. Those aren’t freedoms. Those are oppressions.”

Arkoosh has worked with Gov. Brad Little throughout both of their careers — Arkoosh as a lobbyist and Little as a legislator.

Arkoosh said if an attorney general focuses on not making policy, but advocating for policies adopted by the legislature that are deemed constitutional, he’s not sure how bad the criticism of that attorney general would be.

“If you have an AG who instead wants to propound his personal cultural beliefs instead of those statutes, I can see more controversy,” Arkoosh said. “Just by doing the job properly, we’ll bring the temperature and the tone way down.”

He said this race could be a referendum about whether the office will remain a law office or will become a cultural war room for a conflict entrepreneur.

“The people here in North Idaho, just as much as anybody, have to make that decision about their lives,” he said.

Arkoosh and Labrador are scheduled for a live debate at 7 p.m. Oct. 3 on Idaho Public Television.