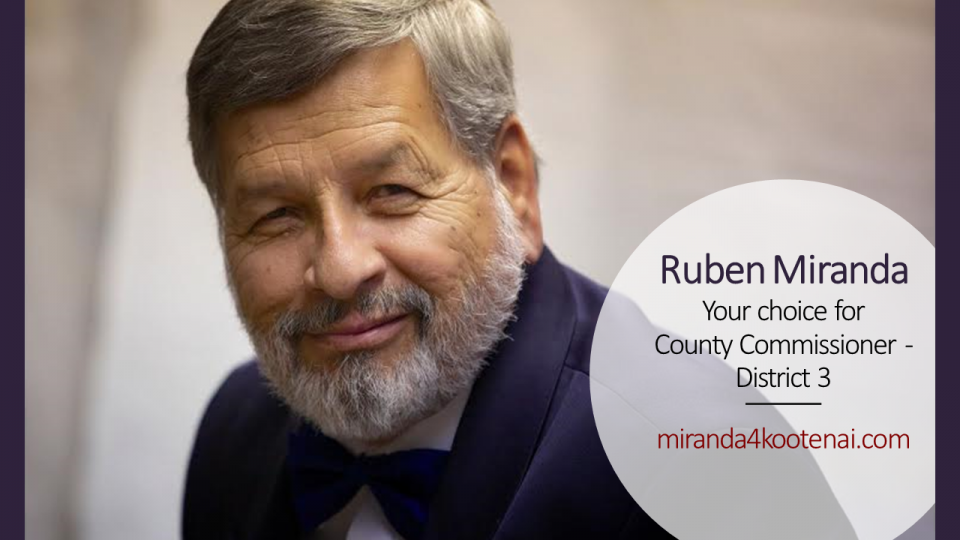 This Friday, the Democratic Club features a visit from Ruben Miranda. Ruben is the Democratic Candidate for Kootenai County Commissioner, District 3. He is running against GOP candidate Leslie Duncan. Ruben will have several issues on his agenda if elected as Commissioner. For example, he intends to rescind the ordinance allowing for the opt out of building permits. In addition, he wants to ensure that the board of commissioners responsibly addresses the extreme growth that is projected for the county. Ruben will also work to ensure that we have sensible and enforceable ordinances protecting our waterways and aquifer. Finally, he intends to work for wage parity with respect to County Employees and other local jurisdictions. Ruben will outline his campaign at the Iron Horse Bar and Grill. Come down and support his efforts to bring common sense, common decency and common courtesy to County Government.

The Board of County Commissioners consists of three elected officials who hold four-year terms. The Commissioners serve as the governing body of Kootenai County. More importantly, they are the taxing authority, the contracting body, and the chief administrators of public funds for Kootenai County. In addition, the BOCC enacts and oversees the enforcement of laws. They also secure professional services for the county.

The Kootenai County BOCC encourages interested local citizens to serve on county advisory boards. These advisory bodies provide input on various areas of responsibility to the Commission. For example, the Parks and Waterways Advisory Board provides input relating to maintenance and improvement of waterways. Other boards include Aquifer Protection and Planning and Zoning. By providing recommendations, the public can influence decision-making affecting County Government. Furthermore, serving in this way is a great launching pad for those with future aspirations for seeking public office. New members to the advisory boards are typically appointed in the fall during an annual ‘open application’ period.