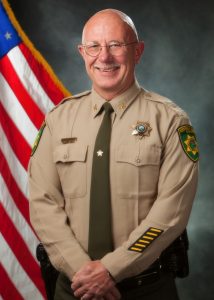 Friday November 30, is a significant date in history as it marks the anniversary of President Bill Clinton’s 1993 signing of the Brady Bill. Our speaker will present a non-bias and informative discussion on the subject of Idaho State Gun Control Laws; waiting periods for purchase, types of guns that may be owned, persons prohibited from owning, felon gun rights restoration, concealed weapons permits, the recently passed “Stand Your Ground” law, etc.

Dan Mattos has been employed as a sworn full-time peace officer since June 19, 1978, beginning his police career with the Kingman, Arizona, Police Department (PD). Dan served with Kingman PD for over 14 years until he moved to Idaho in October, 1992, to take a position with the Sandpoint Police Department. Dan served with Sandpoint PD from October, 1992, until February,1995, when he began his career with the Kootenai County Sheriff’s Office (KCSO).
Dan was promoted to Captain via a competitive testing process in March, 2008, and was appointed to the rank of Major in September, 2009. During his tenure Dan has commanded the Operations Bureau at the Sheriff’s Office, overseeing the overall police field services for the Department. In July, 2014, Dan was appointed as Undersheriff to Sheriff Wolfinger. Dan is a graduate of the FBI National Academy, class 239.

Attention all Dem Club attendees:  The KC Dem Community Outreach Committee is sponsoring a month-long food drive for the local food bank. Community Action Partnership in Coeur d’Alene provides food assistance for local families year round. As part of our effort to support local entities that help folks in need, we will collect donations of food during the whole month of December. Bring your donations of canned food each Friday to the Dem Club Lunch through December 28, or to the holiday party at the Global Kitchen on December 10, 6:30-8 pm. You may also contact Cathy Kraus at catk1994@gmail.com for questions or donations. If you’d rather make a cash donation, please give directly to CAP at 4144 Industrial Loop, Cd’A.