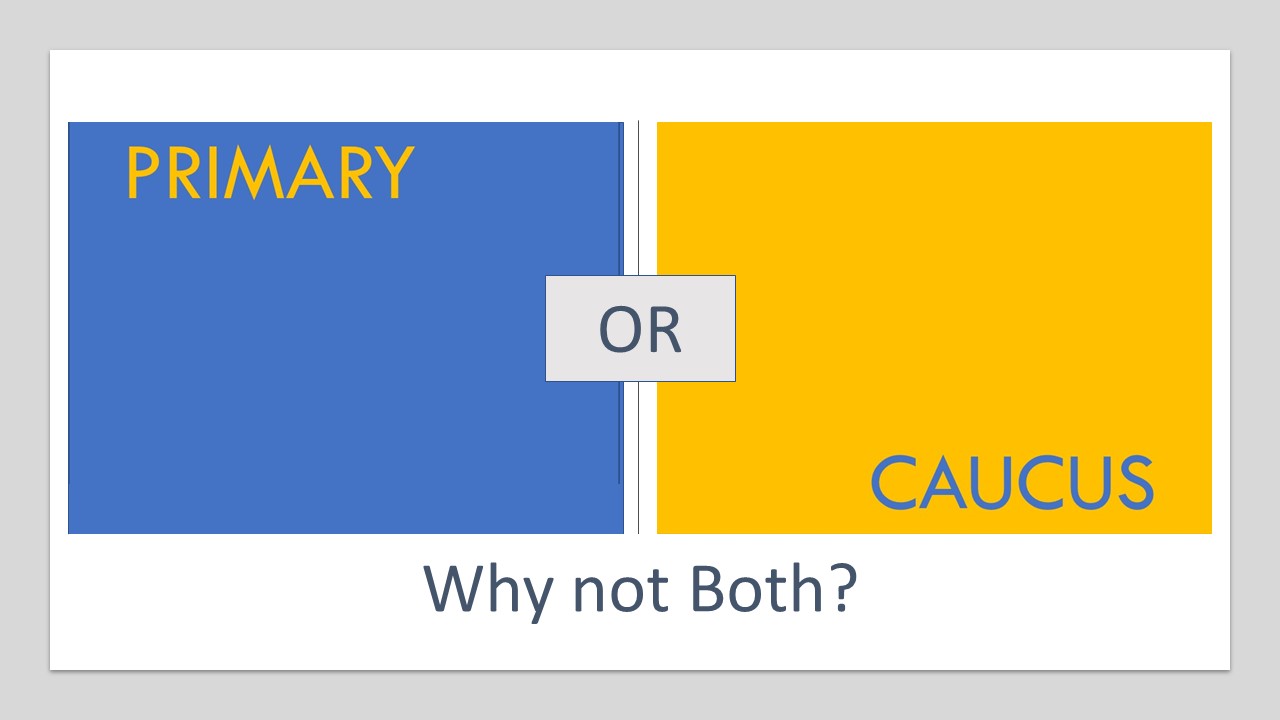 What are Kootenai County Democrats doing in 2020 to help select the Democratic candidate for President of the United States?

On March 10, 2020, Idaho voters will have the chance to vote for their favorite candidate for President of the United States. In 2020, after years of holding caucuses, Idaho Democrats will hold a “semi-open presidential preference primary” to choose their favorite candidate to run for President. Each state across the country uses a different method of choosing delegates–some use primaries, some use caucuses, or combination thereof. The presidential primary election on March 10 includes the candidates of any political party who has qualified for the Idaho ballot. This primary election is only for choosing presidential candidates for the general election. As with other elections, the Presidential Primary is conducted by the county elections office with guidance from the Idaho Secretary of State.

The Kootenai County Democrats urge voters to file an Application for Absentee Voter’s Ballot (AAVB) by February 28, to not miss voting due to unforeseen circumstances for any election during 2020. Voters can download the form from the Kootenai County Elections Department website (https://www.kcgov.us/DocumentCenter/View/2719/Absentee-Ballot-Application-PDF) or stop by the Elections Office at 1808 N 3rd, Cd’A. (This form also very handily includes a change or declaration of party affiliation needed to vote in the primaries.)

Which candidates will be listed on the Democratic ballot?

What is a “semi-open primary”?

The Idaho Democratic Party has chosen to keep the presidential primary semi-open. This means that voters who are registered unaffiliated or registered as a Democrat can choose the Democratic ballot and vote for their favored candidate. The same is true of the Republican Party: unaffiliated or registered Republicans may choose the Republican ballot. The voter’s choice of ballot is recorded on the polling documents. A primary election, instead of a caucus as happened in many years past, enables all voters, at their normal polling places, to have a say in choosing the person who will run for President in 2020.

How is a primary election different from a general election?

There will be two primary elections in 2020. What is the difference between the March 10, 2020, primary and the May 19, 2020, primary? The March 10 primary is ONLY for the purpose of choosing presidential candidates. There is another primary election on May 19 for the purpose of choosing candidates for county (e.g., sheriff), legislative, and congressional offices. Be sure to vote both times!

How do I change my party affiliation?

Your party affiliation determines which ballot you will receive when you vote in the primary election. For example, if you are a register Democrat, then you will automatically receive a Democrat ballot. If you are registered as any other party, except unaffiliated, you must change your party affiliation before you can vote on the Democratic ballot.  However, there is no deadline to change your party affiliation before the March 10 Democratic presidential primary election.  You may change it when you vote at the polls.  If you are unaffiliated , you can choose to vote on a ballot from any party. What ever affiliation you choose is recorded and is part of the public voting record. There is no Independent Party in Idaho. “Independents” in Idaho are considered unaffiliated voters.

This year the Idaho Secretary of State has approved a new Application for Absentee Voter’s Ballot (AAVB) which each voter who wishes to vote by mail must complete before the primary elections. In order to vote in either of the primary elections this year, the voter must declare their party affiliation of which “unaffiliated” is a choice.

This year’s AAVB enables voters to choose their desired ballot for the Presidential Primary Election on March 10, 2020, and then to change their party affiliation, if desired, for the later primary election for local and Congressional offices on May 19.

The last day to change your party affiliation for the May 19 Primary Election is March 13, 2020.

What is a caucus?

A caucus, as many of you remember, was a grassroots gathering of voters who got together to lobby for their own favorite candidate as well as elect delegates to state convention. In 2016, over 2,000 Democrats gathered at North Idaho College and at the Fairgrounds in Kootenai County to choose among several candidates, with the main interest the choice between Bernie Sanders and Hillary Clinton, and to elect delegates to the state convention. In many ways a caucus is truly democratic and exciting and often the first time for many to participate in such an open exercise in democracy. However, for many others, it is decidedly undemocratic because so many voters are prevented by innumerable circumstances for voting during a caucus: job, childcare, eldercare, illness, travel, weather, etc.

Many of us were, therefore, truly heartened by the decision of the Idaho Democratic Party to change its method of delegate selection. The caucus in 2020 is the way delegates are selected to attend the Idaho Democratic State Convention in Boise, June 4-6, 2020. Delegates chosen for the state convention may ultimately attend the national convention to select the one Democratic candidate for President. The Kootenai County Democratic Delegate Selection Caucus will be held at the Harding Family Center, 411 N 15th, Cd’A, on Saturday, April 4, 2020, at 1 pm PT.

How will the delegates be apportioned?

On March 10, 2020 the Idaho Democratic Party will, as stated above, hold a presidential primary election coinciding with the Republican presidential primary. This primary vote will determine the percentage of voter support for those candidates appearing on the ballot. Only candidates that receive 15% or more of the vote will be awarded delegates to the convention. For example, if Bernie Sanders gets 50% of the vote in Idaho’s primary, he will be awarded 50 percent of the delegates to the Idaho Democratic State Convention in June, 2020. If Joe Biden gets 25% of the vote, he will be awarded 25% of the delegates.

Kootenai County will appoint 34 delegates to convey their apportioned mandates to the Idaho Democratic State Convention. The state convention takes place in Boise from June 4-7, 2020.

Who gets to participate as a delegate?

As the time draws near, the Kootenai County Democrats will publicize their primary and caucus and encourage all voters to get out to vote. After the primary, they will urge registered Democrats to attend the caucus to run as delegates for their chosen candidates to the Idaho Democratic Convention in Boise in early June. A Democrat does not have to be present at the caucus to run for delegate. The Democratic National Committee encourages each state to have delegates that are representative of the composition of its diverse population: people of all ages, races, gender and gender identity, veterans, etc. Delegates to the Convention in Boise have the chance to run for delegate to the Democratic National Convention in Milwaukee in July, 2020. Attendance at the state convention is not mandatory in order to run for national delegate; however, delegates at the state convention must vote on national convention delegate nominees and candidates are encouraged to campaign for national convention delegate spots.

The Kootenai County Democratic Central Committee, which is charged with putting on the local delegate selection caucus, invites all Democrats in the county to come and participate in this grassroots democratic process. There will be several opportunities as the time draws near to learn more about the caucus and to register to attend. It’s free and open to the public, who may observe the process. Of course, we urge every voter to take part in the Idaho presidential primary election.